Auto Profits To Take A Hit On Tariffs

General Motors (GM) fell 2.5%, along with other automakers, after Daimler AG (ETR: DAI) warned that its earnings would be negatively impacted by the tariffs proposed by the US and China.

Daimler said in its statement, “Fewer than expected SUV sales and higher than expected costs – not completely passed on to the customers – must be assumed because of increased import tariffs for US vehicles into the Chinese market.”

Specifically, the tariffs would impact the sales in its factory in the State of Alabama. Daimler stock was trading down -4% on the news, as was the broader automarket, as measured by the First Trust NASDAQ Global Auto Index Fund ETF (CARZ), which was down -3.5%.

In analyzing GM’s weekly chart, we can see that it has reversed from the intermediate cycle peak resistance. While it’s unclear if it has already started the declining phase of its current market cycle, we do expect a decline to continue into late August. Our target is around $38.50. 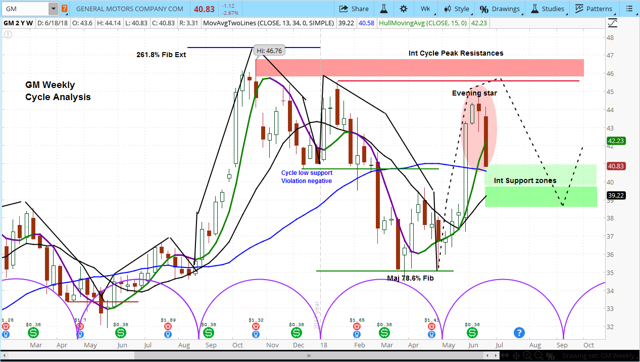 For more from Slim, check out the askSlim Market Week show every Friday on our YouTube channel.

“The new futures hub is amazing. Great and easy way to keep an eye on the futures during the week in between the fabulous futures weekly videos. Amazing work !“