Can The Market’s Move Lower On Friday Continue? 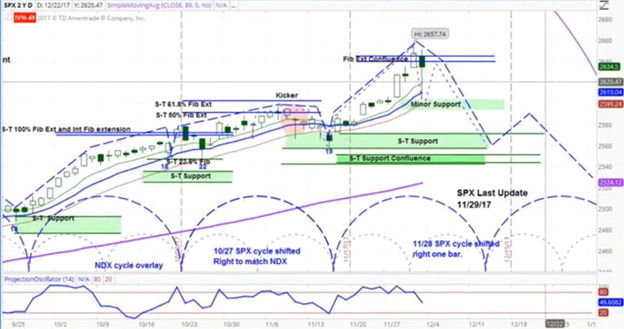 On Monday, Chinese stocks continued their declines from the previous week, falling 1.3%. On Tuesday, North Korea fired an intercontinental ballistic missile that demonstrated it could hit any location in the United States. However, this had little impact on US equity markets.

On Tuesday and Wednesday, the SPDR S&P Retail ETF (XRT) rose 5.6%, as sales for “Cyber Monday” increased by 17% from the previous year, totaling a record-setting $6.5 billion. Also, the Senate confirmed Jerome Powell on Tuesday as the next Chair of the Federal Reserve Bank and the bond market fell the following day.

On Thursday, Senator John McCain stated his intention to vote in favor of the Republican tax bill, which sent equity markets higher, as McCain has previously stated strong concerns. Also, OPEC extended its production cuts until the end of 2018, in their attempt to clear the global supply glut in the oil market. Crude oil futures (/CL) reacted minimally on Thursday but rose 1.5% the following day.

On Friday, Senate Majority Leader Mitch McConnell stated that he had enough votes to pass the tax cut legislation. However, equity markets sank, as former National Security Advisor Michael Flynn pleaded guilty to lying to the Federal Bureau of Investigations. Along with his agreement to cooperate with the investigation on Russia’s involvement in the US election, this sent the S&P 500 (SPX) initially down to 2605, but later recovered most of its losses.

The SPX chart above shows our projection for the coming week: lower or choppy price action early in the week with downward pressure increasing as the short-term cycle ends. The blue-dotted half circles at the bottom of the chart illustrate the short-term cycle patterns. For a more detailed look at cycle analysis for a broader selection of futures contracts, watch the askSlim Market Week every Friday afternoon.

“Just want to reinforce yesterday’s Future Speak as BEST ever. Been following you for three years, and this session was clearest, most relaxed, with best and most appropriate level of detail yet. Plus, the teaching insights coupled with the new chart format introduced added icing on the cake. FS is always a highlight of your service for me, and this was exceptional. Please continue the great work!!! And I look forward to the Cycles course yet to come.”