A week away from the markets, disconnecting from all my devices (not vices), was sure a welcomed break. OK, I admit I did peek in on the markets on occasion. Seeing the NASDAQ fall 140 on from the peak on Wednesday, through Thursdays low, only to rebound and gain most of it back on Friday, did encourage me back to the bar for another tropical delight.

About that; I will be very reluctant to short any of the cruise lines – ever again. They have figured out how to print money. All ya have to do is charge a ridiculously low fare to get on board, then charge a ton for everything else. Its not a criticism. They figured out the winning formula. I was on the NCL Getaway. It had over 4000 passengers, 2000 staterooms, 20-something restaurants, bars everywhere, fantastic service, great food and accommodations that are large and comfortable. Gone are the old days of the staff putting on an amateurish stage show. There were many great entertainment venues, with real professionals. Its a massive floating luxury resort. It takes a few hours to get passed questioning, “how does this thing float.”

Back to the real world. Since we did not have a “Market Week” last Friday, we figured it would be a good idea to make a few comments.

The stock market and bond markets followed the script we wrote before we left almost perfectly. Background news was a bit weird. Draghi actually disappointed the markets on Thursday. The world was looking for another “bazooka.” Instead, the ECB extended QE for an additional six months, with no increase in the (Q)uantity per month. That showed the conservatives in the ECB have control. That cracked the stock and bond market in the U.S.

We had mentioned that it seemed money had been flowing into the US lifting those markets together. But when the ECB news hit, the euro flew and the dollar broke, causing an outflow from US denominated assets. And, we did look for that rally last week in the euro.

Then came Friday, and with a stronger-than-expected jobs number and Draghi commenting again, “We’ll do whatever it takes,” stocks and bonds rebounded in a huge way. Gold was up on the week, we’re guessing, declaring 1045 as an area of strong support (maybe major). And oil continues to slide, helped by OPEC’s failure to come up with a deal that would support that market.

When we did our “short-term view” on November 27, we almost hit a bulls-eye in the stock market. Look at the chart below, exactly as we shared our projections back on that day. 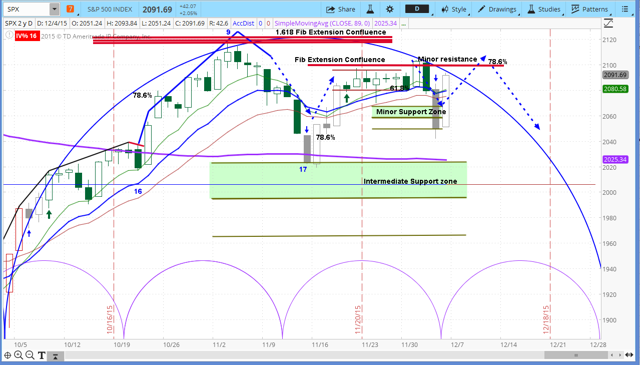 You can see, the rally stalled at minor 78.6% resistance and then fell nicely to support before vaulting upward on Friday. You can also see we expect this rally to fail in a big way. It might take a number of days, even making more upside ground. If SPX breaks below 2042 again in the next few weeks, bye bye bull. And that is the expectation based on intermediate cycle patterns.

Bonds: This expected break has more downside. We have been calling the /ZN and /ZB big shorts for a couple weeks.

Oil: More downside with the low not expected until January

Euro: We wonder if this or the yen will be the best currency for 2016. That looks like a dollar top.

We’ll look at those patterns and all of the futures and indexes on Wednesday. Don’t miss “FutureSpeak” as we get caught up on all of the charts and analysis this week.

We hope you had a great week and a better one coming up!

“Hi Slim
This tech tool is awesome and I am eager to see the trade set up for counter trades.
Thank you for all the good work.”