Netflix (NFLX) was trading 7% higher on Tuesday morning, after flat earnings and better than expected growth in subscribers.

Netflix reported earnings per share of $0.64 and total revenue of $3.7 billion, compared to analyst expectations of $0.64 and $3.69 billion. However, the company added nearly 2 million US subscribers and 5.46 million internationally, compared to 1.45 million and 4.98 million.

We previously noted the positive technical patterns on the stock chart, highlighting the early cycle low, which is a bullish occurrence. We thought it might be tested, but in fact it was not. The stock may now move into a resistance zone defined by the rare 423.6% extensions. 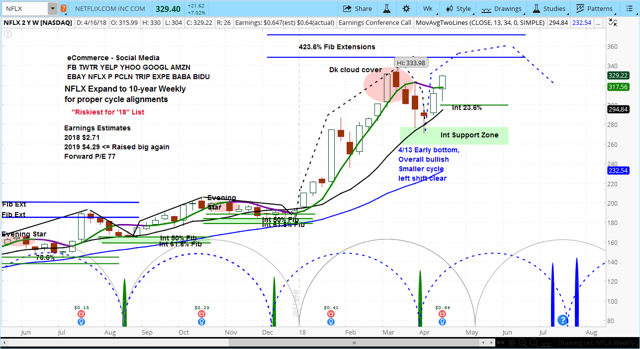 “I absolutely love your service you have made me some really nice money in this bear market. 2008 I lost my shirt because I didn’t have your service then. Different story this time around. Thanks for the company’s hard work it is certainly paying off for me.“