Randgold Resources (GOLD) traded 7% lower on Thursday morning, after reporting earnings that missed Wall Street estimates. The company reported earnings per share of $0.60 and total revenue of $273 million, compared to expectations of $0.74 and $345 million.

This poor performance was due in part to labor issues at their Tongon mine in the Ivory Coast, according to CEO Mark Bristow. However, he reaffirmed the company’s guidance for FY2018, noting that a new mine in the Democratic Republic of the Congo was recently fully commissioned.

In analyzing the stock’s market cycles on the weekly chart below, we can see that it may have a little further risk to the downside as completes the declining phase of its current market cycle. Our analysis also shows a textbook “head & shoulders” top, with the target nearing at $75.

With the market cycle ending soon, this could turn into a “golden” opportunity, as this volatile stock begins a new cycle. For an introduction to cycle analysis, check out our Stock Market Cycles video. 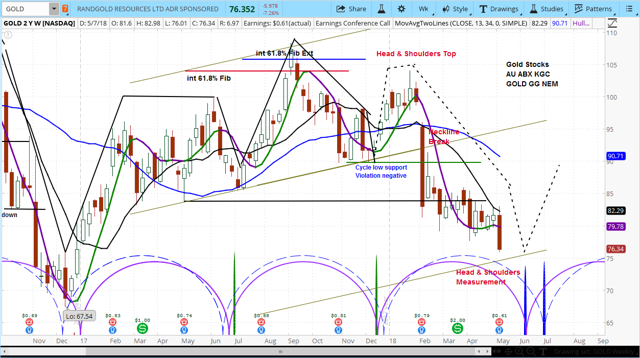 “Hi Steve,
I just watched Money VS Process. It was profound, powerful, precise, utterly practical and inspirational.
Thank you!
Delmar”