Stocks Bounce But Cycles May Keep Things In Check 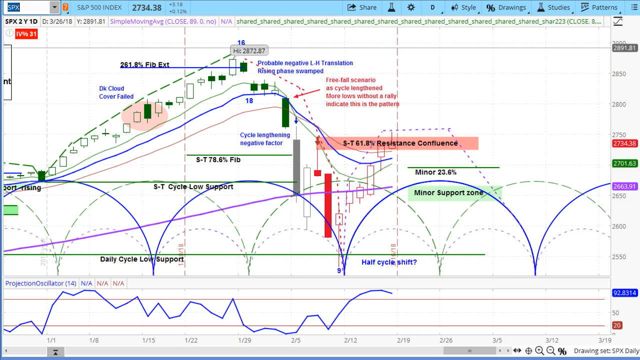 On Wednesday, the Bureau of Labor Statistics (BLS) released the latest data for the Consumer Price Index (CPI). This was hotly anticipated because of concerns about the effect that inflation could have on stock prices.

In dramatic fashion, the S&P 500 futures fell 48 points when the BLS announced an increase of 0.5% in January, compared the 0.3% that economists expected. Remarkably, stocks staged a recovery, closing 35 points higher on the day. However, inflation concerns lingered, as gold and silver also moved higher.

On Thursday, the BLS released the figures for the Producer Price Index, which came in at 0.4%, which was in line with expectations. Later that day, news surfaced the while the Apple (AAPL) iPhone’s market share in China declined to 20.6% from 21.8%, shipments grew 12% over the previous quarter while Android shipments declined 17%.

Along with news that Warren Buffett increased his stake in AAPL, this news may have created some optimism that once again pushed stocks higher on the day. This made AAPL Buffett’s largest position, surpassing the beleaguered Wells Fargo (WFC) for the top spot in his portfolio.

On Friday, the Department of Commerce indicated that the housing market continued to strengthen, with increases in housing starts, new construction, and building permits. With stocks up on the day, news later surfaced that Special Counsel Robert Mueller had indicted 13 Russian nationals and 3 Russian entities on charges related to tampering with the 2016 Presidential election. However, this created only minor waves in the markets.

In our Big Picture Analysis, we asked if the stock market’s bounce would lead us again to all time highs, or if the early-February downtick was part of something larger. Our conclusion is that the market is unlikely to produce significantly higher highs, and that we could indeed move even even lower. We believe we are in a period of risk that will last until the current intermediate market cycle ends in the May-July 2018 period.

Given that context, the daily chart above shows our projection for the S&P 500 (SPX) in the coming week: a minor decline perhaps into the range of 2703 to 2665, and later rising again as a new market cycle begins. The blue semicircles represent the short-term market cycles.

For a more detailed look at cycle analysis for a broader selection of futures, watch the askSlim Market Week every Friday afternoon, or subscribe to our YouTube channel.

“Slim’s cycle analysis and his timely videos’ give me the confidence and level of aggressiveness to be comfortable with my trades and my results are a strong testament to the insight gained from his detailed analysis.
I couldn’t trade at this level without his work.”