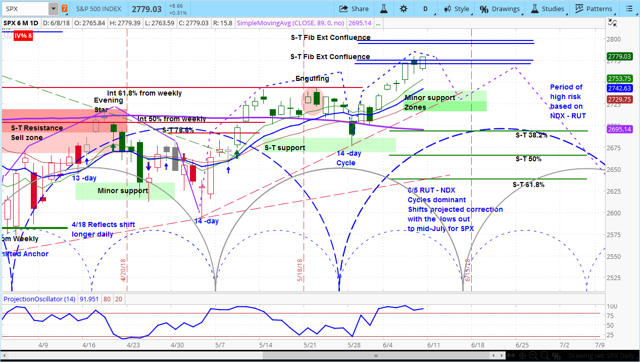 On Monday, the S&P 500 rose 0.4%. Despite trade tensions, European equities climbed and the dollar declined. As well, US bond yields continued to rise, while Italian yields fell. In the UK, Construction PMI for May came out at 52.2, compared to consensus at 52.0, and 52.5 in April.

On Tuesday, stocks were flat, on a day in which trade tensions rose between the US, Mexico, and Canada. “[Trump] is very seriously contemplating kind of a shift in the NAFTA negotiations,” explained chief economic advisor, Larry Kudlow, “His preference now, and he asked me to convey this, is to actually negotiate with Mexico and Canada separately.” The peso dropped 1.6% for the day.

On Wednesday, the S&P 500 was up 23 points, or 0.8%, even after the European Central Bank (ECB) Chief Economist Peter Praet said that they would decide on the future of the QE program at their June meeting. Meanwhile, Tesla Motors (TSLA) gained nearly 10%, after shareholders rejected a campaign to remove Elon Musk as Chairman as well as shake-up the 9-member board of directors.

On Thursday, the overall stock market was flat, with the technology sector weaker – including Facebook, Microsoft, and Google all down over 1%. The 10-year treasury yield fell below 3%. This may have have been due in part to the upcoming G7 meeting in Canada as well as forthcoming central bank meetings.

On Friday, stocks were up 9 points, or 0.3%, as the G7 meeting had little discernible impact. Apple (AAPL) though was down over 1% on news that it told one of its suppliers to produce 20% fewer components. Yet it was unclear whether another supplier would pick up the difference.