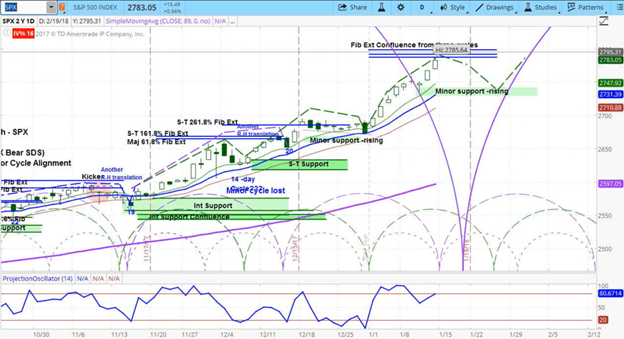 On Monday, technology stocks, including semiconductors, led the move higher. On Tuesday, the Japanese Yen rose and US bond prices fell, as the Bank of Japan announced a reduction in their program to purchase government bonds. With interest rates higher, US financial stocks led the way higher, as banks tend to benefit when rates increase.

On Wednesday, the People’s Bank of China indicated it was considering a reduction in its portfolio of US government bonds. The bond market and the dollar index fell on the news. Equities fell premarket but bounced back, again led by financial stocks as well as retail.

On Thursday, the Bureau of Labor Statistics released the Producer Price Index results for December: a decline of 0.1% as compared to a rise of 0.4% in November. This was the first time the index has fallen in over a year. The Consumer Price Index, released on Friday, showed a 0.3% increase. Bond prices edged lower. Check out this video for our view on bonds.

The daily chart above shows our projection for the S&P 500 (SPX) in the coming week: a correction to the support zone of between 2742 and 2728. Once this cycle completes, the SPX may move higher again. The green-dotted half circles represent the short-term market cycles for Russell 2000 (RUT). The RUT market cycles appear to be driving SPX price more so than the SPX cycles.

“Hi-finally got a chance to look at the futures hub and THANKS! Does look like a one stop shop and is going to help a lot with trading. Great job, really appreciate this service.“