Stocks Up Last Week, But Will It Last? 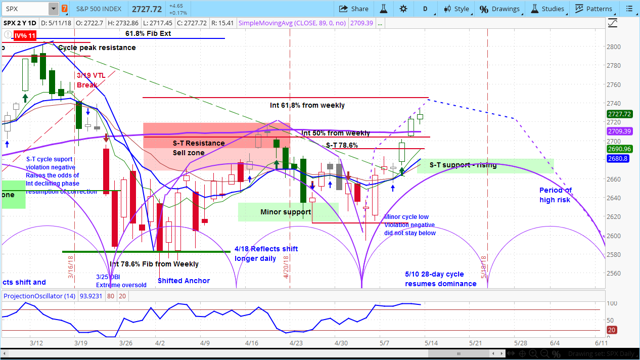 On Monday, the S&P 500 rose 0.4% to 2673. Crude oil rose above $70 per barrel, on tensions related to Iran and Venezuela. Biotech led the way higher, with the SPDR Biotech ETF (XBI) rising by 1.3%. Consumer names lost ground, with the Consumer Staples Sector ETF (XLP) declining by 0.6%.

On Tuesday, the S&P 500 was basically flat, down 2 points to 2771. The Labor Department announced the results of the Job Openings and Labor Turnover Survey (JOLTS) for March, which came in at 6.55 million, above estimates of 6.02 and the February figure of 6.08 million.

The market was quiet for most of the day, awaiting the decision by President Trump on whether the US would remain in 2015 agreement with Iran, known as the Joint Comprehensive Plan of Action. Stocks wobbled after Trump’s decision to pull out, then pushed higher from the lows.

On Wednesday, the market was up nearly 1% to 2697, led by crude oil up 3%, along with energy stocks, via the Energy Select Sector SPDR ETF (XLE) nearly 2% higher. The Producer Price Index (PPI) came in at 0.1% for April, below expectations of 0.2% and the March figures of 0.3%. Crude oil inventories registered at -2.2 million barrels, below estimates of -0.2 million and the previous week’s figure of 6.2 million.

On Friday, stocks were up 6 points to 2728. The Michigan Consumer Sentiment figure for May was 98.8, above estimates of 98.5 and on par with the April figure of 98.8. Also, St. Louis Federal Reserve Bank President James Bullard implied that no further interest rates hikes were necessary. He argued rates had reached a level of “neutrality” in which they were no longer stimulating the economy.

“Slim’s cycle analysis and his timely videos’ give me the confidence and level of aggressiveness to be comfortable with my trades and my results are a strong testament to the insight gained from his detailed analysis.
I couldn’t trade at this level without his work.”