The Stock Market’s Next Big Move; A Cyclical Analysis

The stock market has had quite a volatile period the past six months, with the DJIA moving up and down 500 to 1000 points with ease. In fact, there was one seven-minute period that the Dow moved nearly 1000 points in both directions in the now infamous “flash crash.” The past month has seen the Dow rally from a correction low of 9,614 to this week’s high at around 10,700, a gain of over 11%. So what can we trust is the real direction? Read further for an interesting analysis as to why I believe the stock market has begun the next leg upward in this cyclical bull market.

For the past thirty five years I have dedicated myself to learning a variety of chart studies. I have found one of the most valuable is “cyclical analysis.” This is a method or reading charts that looks for repeating time periods measured from low to low. It’s really an art form vs. a science. There are many automated charting programs that use “idealized” cycles, applying exact repeating periods. This method often throws the user off. It’s better to do it by hand, looking at a range of periods.
When reading cycle movement, it’s often helpful to overlay other studies, like candle sticks, moving averages and oscillators. When a combination of these studies confirms a cycle high or low, it’s often a very valid signal. And it’s really amazing how often an important news item coincides with an expected turn in a cycle.
I have included a Monthly chart of the Dow Jones Industrial Average (DJIA) that goes back to 2001. I marked of important lows with blue vertical lines. Between the lines I placed the monthly cycle lengths at the bottom of the chart. You will notice an astounding repeating pattern. The low of the bear market that occurred in late 2002 was tested in early 2003. From that low the Stock market started its first leg of that bull, which corrected in 2004. That was 19 months from low to low. You’ll notice a similar cycle pattern, of 19 months, in 2005-2006, which was leg two of that bull market. The cycle that contained leg three was 18 months from low to low. This cycle formed the start of the bear market. For “Elliot Wave” technicians, that was a perfect five count.Monthly Dow Jones Industrial Average (DJIA) 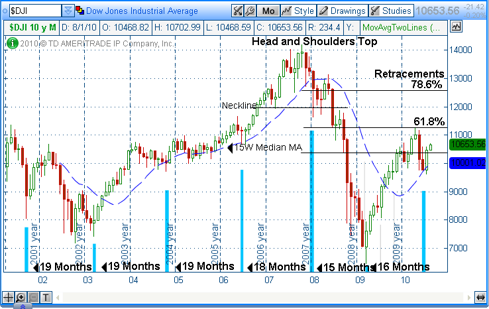 The next cycle contained the entire bear market, lasting 15 months. Notice how the two monthly cycles contained a “Head and Shoulders top, often formed exactly like this. The declining cycle fails early (“left-hand translation”), bringing a big decline. For candle stick readers, you can see a perfect “evening star” formation in the three months that formed the top, a powerful signal that the bull had died. Another confirmation was the rally to the 15 month moving average in 2008 that failed quickly. These are all examples of how multiple studies can be used along with cycle analysis.
That brings us to the present bull market. Notice how the rally from the low in 2009 came astoundingly right up to the 61.8% Fibonacci retracement level. The following correction, in May and June of this year, brought the monthly cycle to 16 months from low to low; within the average range of  cycles over the past decade. Go back and look at the 2002-2007 bull. You’ll notice that if a cycle ended higher than it began, the following cycle took out the high each time. This happens over 70% of the time. That’s an uptrend. You see that when this pattern failed, in 2008, it brought a collapse. Today we have a situation where a monthly cycle has bottomed relatively early in the cyclical bull. That means the next leg upward has begun.
This analysis says it is probable that the past high on the DJIA of 11,245 will be surpassed in the next several months. There is an interesting political overlay to this analysis. The high in 2008 coincided with what was going to be an obvious democratic sweep in congress, bringing in a huge change in government policies. Already, the Bush administration had set the trend, as Paulson’s bailouts and government wild spending had begun. President Obama took that ball and then… well you know. Now we are looking at a strong possibility that congress will change hands again. At very least we’ll have gridlock and there will be a higher level of consciousness on the massive deficit; maybe even saving part of the Bush tax cuts. Anticipation of this more favorable environment for the private sector will have the oppostive effect as that before the bear in 2008.

So, outside of what will be normal, though at time difficult downward corrections, this analysis says the upward romp has resumed. The top of this leg will be between the recent high and the 78% retracement level. The old neckline of the past bull top is at 11,900 on the Dow. To me, that seems like the best this bull will do before the secular forces of the decade-long deflationary debt liquidation takes hold again and the big bear cycle for the stock market resumes;  more on that later.

I just finished watching your style and strategy segment on respecting the trend. I have to say, you couldn’t have better tailored a segment to address what’s ailing me. This segment alone would be worth the cost of a year’s subscription (if not more). Fantastic advice! Thank you so much,”