This Week In Stocks: A Move Higher Then Lower 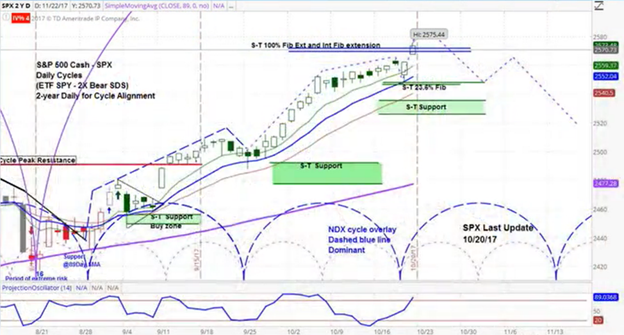 The stock market moved higher last week, with the SPX moving up 22 points to 2575.

On Tuesday, two US Senators announced a bipartisan agreement to maintain the healthcare subsidies that President Trump had signaled he would cut. This sent the SPDR Healthcare Index (XLV) higher by 1.3%. The measure would still have to pass both houses of Congress.

On Wednesday, IBM surged 8.9% as its cloud business helped it surpass analyst earnings estimates 2 cents per share. This helped the Dow Jones Industrial Average ($DJI) close at 23,157 for the first time.

On Thursday, the Hang Seng Index closed 1.9% lower on concern over Chinese deleveraging and Hong Kong interbank rates. Apple (AAPL) shares later dropped 2.5% on speculation of low demand for the newly-released iPhone 8. The S&P 500 (SPX) was initially down by 0.5% but recovered, ending the day marginally higher.

That evening, the Senate passed a budget resolution that would protect a potential $1.5 trillion tax cut from Democratic opposition. This sent equity futures higher and ultimately the SPX ended Friday 0.5% higher. Bitcoin also continued its drive higher, surging above $6000 for the first time.

“Just wanted to say thanks for the /GC analysis and charts; the way the resistance and support zones worked over last couple of weeks… it’s just beautiful if not incredible!.. As I was watching the situation unveiling… I realized that I probably never have traded with such confidence (in fact I asked my wife and she confirmed!.. ). Thank you“