This Week In Stocks: Look For More Downside 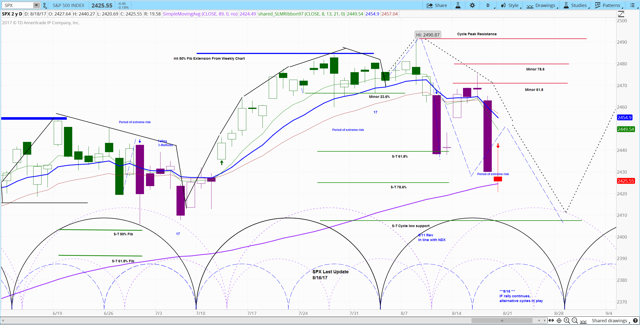 The S&P 500 (SPX) had its second down week in a row, losing 16 points to 2425. The market rose early in the week with concerns about foreign affairs having eased, but then fell again after doubts resurfaced about the Trump policy agenda.

Many of last week’s market moving events were political. The stock market was up 1.1% on Monday, as investors were relieved that a military conflict between the US and North Korea was unlikely. On Tuesday, President Trump’s confused messaging related white nationalist protests raised eyebrows but did not move the market. Yet the comments prompted business executives to resign from White House advisory councils on Wednesday.

The market fell 1.5% on Thursday on a rumor that Gary Cohn might resign from his post as National Economic Council director. President Trump later dissolved the advisory councils, and by Friday, his ability to execute his economic agenda looked uncertain. But after the hard selling on Thursday, the market didn’t do much more than bump around as news broke that Steve Bannon’s was out as White House Chief Strategist. Based on Bannon’s comments after leaving, he will attempt to continue to play a role in politics, as he immediately returned to his position with Breitbart News.

Our work in analyzing market cycles points to further declines in the S&P 500, as bounces will likely be met with additional selling. Intermediate cycles suggest that weakness will continue through late August or early September. The accompanying chart illustrates our short-term cycle projections, with the blue dotted half circles representing the short-term cycle patterns.

“Today I listened to your video on Trader Psychology, and I was so very impressed with your authenticity and candid sharing of your background as a trader.  It is very obvious that you have learned so much through your own evolution on your journey as a trader.

Your ability to share the “good, bad and ugly” about yourself helps me to not only continue to acknowledge my own issues and continue to work on them, but it  gives hope that as we learn to manage our selves and our lives we get better at managing risk/fear/greed and in return know our own tolerances that help us walk down our road of progress.”