This Week In Stocks: Market Cycle May Lead To Decline 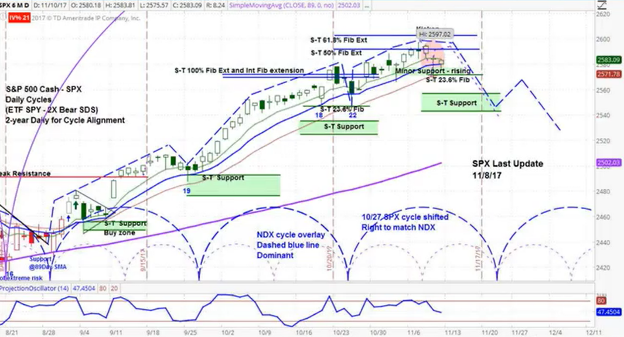 On Tuesday, speculation about difficulties that Congress may have in passing a new tax plan drove the small cap Russell 2000 (RUT) lower by 1.3%. This was led by the financials which make up 18% of the index and who would be key beneficiaries of lower corporate tax rates.

On Thursday, Japan’s Nikkei index dropped 1.2%, leading markets lower internationally. The Nikkei had just reached a 25-year high a few days earlier, amidst President Trump’s in trip to Asia. Meanwhile the Senate unveiled its tax plan, which included corporate tax cuts that wouldn’t begin until 2019. The plan was viewed as dramatically different from the House plan, which added uncertainty as to whether Congress would be able to eventually pass legislation.

The S&P 500 closed 0.4% lower on Thursday, after having recovered from much steeper declines. The jitters continued into Friday’s session, with stocks closing 2 points lower.

The accompanying chart of the SPX shows our projection for this week: a move lower as the intermediate-term cycle comes to a close. This is the first leg of a longer corrective period for the stock market. The blue-dotted half circles at the bottom of the chart illustrate the short-term cycle patterns.

Your FutureSpeak session today was AWSOME! Quite helpful to me and obviously took a lot to put together. It was superb, and I thank you.