• Trade policy news continued to drive volatile price action in stocks, with much of it flowing directly from the Tweeter in Chief.

• Our projection for the next couple weeks is for the SPX to build a consolidation range within the decline that started in February that we outlined in our Big Picture Analysis. 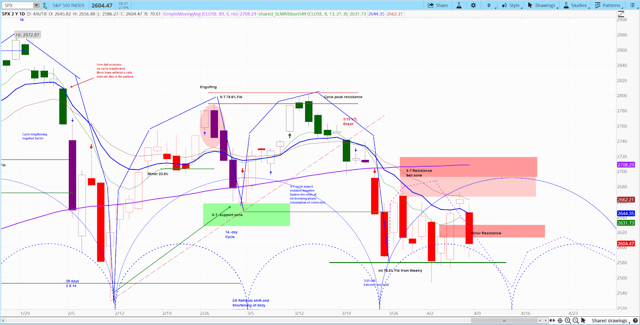 On Monday, the market was down after China announced a $3 billion retaliation to the steel tariffs previously announced by the Trump administration. Later, President Trump tweeted that Amazon (AMZN) is not paying its fair share of taxes and that it is taking advantage of the US Postal Service. As well, the Institute of Supply Management (ISM) announced the latest Purchasing Managers Index (PMI) which came in at 59.3 versus 60.1 expected.

On Tuesday, the Trump administration announced 25% tariffs targeting $50 billion worth of Chinese goods in such sectors as electronics and aerospace. Bloomberg reported that despite the President’s Amazon tweet, multiple sources confirm that, “there are no active discussions about (taking action) against the company.”

On Wednesday, equities dipped, after China announced a 25% tariff on the import of US products ranging from aircraft to soybeans. Despite the escalating rhetoric, economic advisor and TV news personality Larry Kudlow called the interactions between the US and Chinese governments a “negotiation”. Stocks then recovered. Kudlow’s ability to manage communications may have been one reason that Trump brought him on board.

On Thursday, trade war fears continued to ease and the market extended its gains. However, after the close, Trump said that he had directed US Trade Representative Robert Lighthizer to consider an additional $100 billion in Chinese tariffs. Equity futures dropped again.

On Friday, the Labor Department released the initial estimate for Nonfarm Payrolls for March, which came to 103,000 versus the 193,000 estimate. Dizzied markets nonetheless attempted a bounce – failing only after Trump tweeted about the “unfair” preferential treatment afforded to China by the World Trade Organization.

Projection for This Week in the S&P 500

This week will likely involve more waves, with trade news perhaps continuing to dominate price action. Chinese President Xi Jinping is scheduled to speak on Wednesday and the leaders of the US, Canada, and Mexico may announce new developments at the Summit of the Americas in Peru on Friday. Earnings season will begin next week with the banks reporting first, and the government scheduled to release PPI and CPI inflation data midweek.

Our approach to technical analysis uses market cycles to project price action. Our projection for the S&P 500 (SPX) in the coming week is for period of choppy, rangebound trading, creating a possible consolidation between a resistance level at 2672 and a support zone of 2550-2580. The purple semicircles on the daily chart above represent the market cycles.

For an introduction to cycle analysis, check out our Stock Market Cycles video, or watch the askSlim Market Week show every Friday on our YouTube channel. The latest episode is below.

“Slim, I just joined level 2 about 10 days ago. Your videos and approach are fantastic and have been very helpful to me. Thanks to you I had my best trading week this week I have had in a year.Thanks again for sharing your knowledge and experience. Best to you and your team and God bless.”