Amazon (AMZN) dropped 5% on Wednesday morning, after a new report that President Trump may go after the tech behemoth.

“Trump tells people Amazon has gotten a free ride from taxpayers, “ according to Axios, who also noted its “cushy treatment from the US Postal Service.”

Given AMZN’s $200+ price to earnings ratio, it isn’t that surprising the stock is trading lower today. Presumably, the PE ratio would be lower, but for the company investing its profits into potential new lines of business that could propel future growth. This is the reason that investors have tolerated this metric at such high levels.

In using market cycles to analyze the weekly chart below, our view is that AMZN may rebound into a resistance zone currently around $1500. Next, the stock could drop to near $1330, as the late-May period approaches and the current intermediate cycle moves into its final phase. Such final stages often bring the biggest risk of decline. 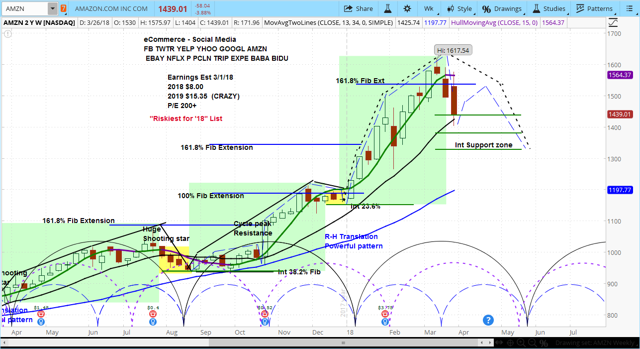 “Really appreciate the HUB…one stop shop..weekly, daily charts and latest video and trends for top investment instruments. Looks like a lot of hard work goes into it. Great job team“