Twitter (TWTR) traded 5% higher on Tuesday morning, after it was announced the company would replace Monsanto (MON) in the S&P 500, which is composed of large cap companies. The stock eclipsed the $40 level this morning, which represents a 3-year high.

Simultaneously, Cascend Securities raised its TWTR target to $45 from $40, which is a 19% increase. Bayer’s (BAYN) $66 billion acquisition of MON later this week will create the world’s largest agribusiness firm, while effectively retiring the Monsanto brand.

In analyzing the chart for TWTR, we can see the stock is still in the rising phase of its current market cycle. However, it has now hit our target zone, which is based on Fibonacci extensions. While the stock’s chart pattern remains strong, often a pullback occurs after this type announcement.

Thus, after it begins a new market cycle in July, our near-term target is $44. As such, we think this potential pullback could be an opportunity. For an introduction to cycle analysis, check out our Stock Market Cycles video. 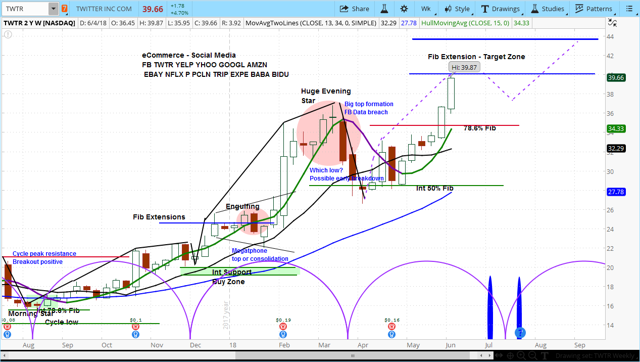