US Steel (X) traded 5% lower on Monday morning, after trade tensions between the US and China eased dramatically over the weekend.

Treasury Secretary Steven Mnuchin announced on Fox News on Sunday that the “trade war” between the US and China is now “on hold.” Both sides have agreed to suspend their proposed tariffs to create a more productive environment in which they can negotiate a wider trade agreement. Recall that US Steel was one of the initial beneficiaries of the first round of tariffs announced by the Trump administration in March of this year.

This comes on the heels of the Trump administration last week announcing that China had agreed to lift trade barriers that would result in a $200 billion increase in US imports. However, this was followed up by a senior Chinese official stating that “to (his) knowledge” no such agreement had been reached.

In analyzing the market cycles on X chart below, there are two sets of cycles. The black set of cycle brackets is driving the price action for X. The dotted purple cycles represent the Powershares DB Base Metals Fund (DBB). As such, our analysis is that X is in a declining phase, due to bottom in the very soon. Our near term price target is $31. For an introduction to market cycles, check out our Cycle Analysis Workshop. 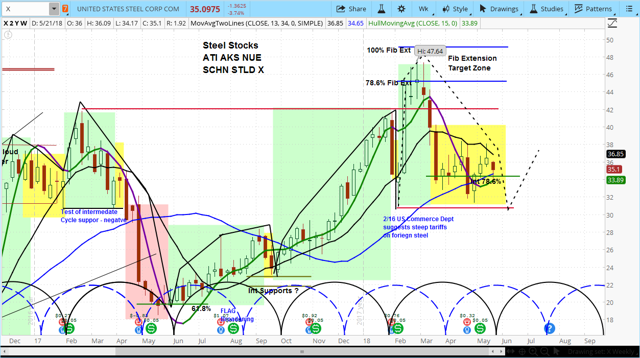 “I found Slim’s channel on YouTube and followed your analytics. Always amazed at the accuracy of analytical information“